In the morning, our driver told us he was taking us to some artisan workshops. The first was for miniatures made of recycled materials. Bicycles, pedicabs and carts were made of found parts. The wheels were cut from a coke can, and shaped around a dowel. The tires were bits of surgical tubing and the spokes fishing line.

Next was a spoon made of zebu horn. Polishing was done with denim cut from old jeans, put onto the pad of a rotary sander.

Embroiders were not at work that day, but the work they showed us was exquisite. They even had some pulled-thread hardanger. The language gap was such that they had difficulty understanding that we did not want to purchase any souvenirs to bring home. Anita and I pack extremely light — carry on luggage only. We’re also aware of the fact that we still haven’t displayed the crafts we brought home from Kenya (2012) or Cambodia (2014). No more souvenirs for us.

The ride north was uneventful. Rice paddies filled low ground. As we got closer to Tana, the density thickened and space between towns shrunk.

Before dropping us off at our hotel (day use) for the day, our driver took us to the top of one of Tana’s hills to see the city stretch out below us.

Our flight was just after midnight, so we left our hotel at 9:30, glad to be homebound. Our flights were Antananarivo-Paris; Paris-Seattle; and Seattle-Victoria.

It was an incredible trip, and exceptionally nice to return home. 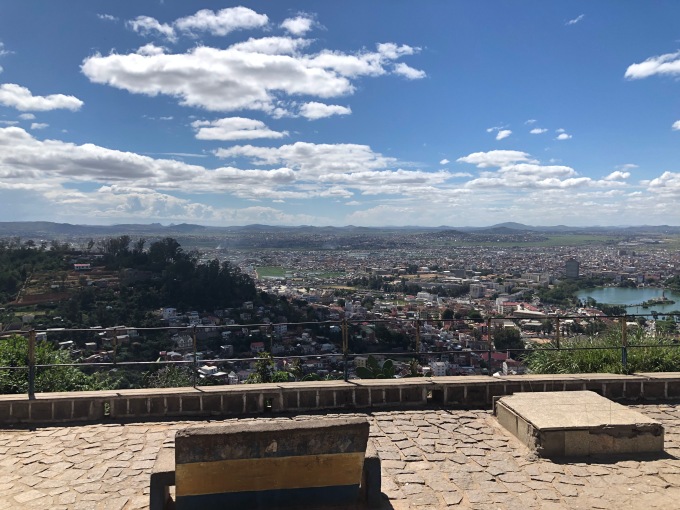 Tana (Antananarivo, the capital of Madagascar).